To share your memory on the wall of William Richardson, sign in using one of the following options:

To send flowers to the family or plant a tree in memory of William H. Richardson, please visit our Heartfelt Sympathies Store.

Receive notifications about information and event scheduling for William

There are no events scheduled. You can still show your support by sending flowers directly to the family, or planting a memorial tree in memory of William H. Richardson.
Visit the Heartfelt Sympathies Store

We encourage you to share your most beloved memories of William here, so that the family and other loved ones can always see it. You can upload cherished photographs, or share your favorite stories, and can even comment on those shared by others.

Posted Mar 06, 2020 at 08:33am
My Dad, My Hero. I feel comfort knowing you're not in pain anymore. You were one tough cookie all of your life. Now, you're with my other Hero in Heaven. My Beloved Brother Billy. Thanks for taking me fishing, hunting, long Sunday drives, buying me anything I wanted, and, just EVERYTHING. I even left my bike in the driveway one time. And, you came home from work, and, not seeing it, ran it over. Not even getting mad at me. But, you, as kind hearted as you're, went and bought me another. I sure will miss talking about Football with you, not too mention, everything else. I will long to hear your voice in person, and, on my answering machine. Thanks for being the BEST DAD, AND, HUSBAND TO MOM. I LOVE YOU DAD! Charlene~
Comment Share
Share via:

Posted Mar 05, 2020 at 12:34am
About 45 yrs. ago Charlene and I were out riding our pony's , it was late when we arrived back to Betz and I was going to let my pony there for the night . In the meantime Bill came outside to get control of that crazy goat so I could put my pony in the coral . Little did I know but the joke was about to be on me . I led my pony into the barn and into the coral Bill released the goat and that crazy thing chased me right up a tree ! ! ! I was terrified , all I could hear was Bill , Char, and Joyce laughing there butts off, and oh yeah they left me up that tree for what seemed like eternity , lol . 😆 . I will never forget Bill's laughter that day , he was quite a prankster . . My heart and prayers are with all of you at this time , Love always , Patty . 💕
Comment Share
Share via:
CB

You & I had so many good times together. Love You Patty. Thanks for all the buttered noodles. lol.. 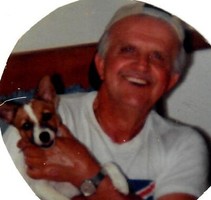